The Basset Hound is a dog that’s easily recognised thanks to its big, long body on short legs, long ears and droopy eyelids. This breed originates in France, which is reflected in its name: ‘bas’ from basset means ‘low’ in French. With its European history recorded as far back as the 1500s, the Basset Hound has been in Australia since 1957.

Basset Hounds are heavy dogs, weighing 18 to 27 kg, but only stand 33 to 38 cm tall due to their short legs. They have a short, close-lying coat that requires little grooming. Coat colours of Basset Hounds are tri-colour (black, tan and white) or bi-colour (lemon and white, red and white).

This “Droopy” dog may have a glum, solemn expression but the truth is the Basset Hound is a gentle, sociable dog with a sense of fun. It can get into mischief as a puppy but with training it will learn good manners and turn into a loving family dog that adores children and gets on well with other household pets.

This breed doesn’t like to be alone, and it’s better to get two Basset Hounds to keep each other company if you’re away a lot. Bassets can be kept indoors as well as outdoors. A full fence is imperative to prevent your Basset from escaping, which it will try to do as soon as it picks up an interesting scent.

Because Bassets love to eat but are quite lazy in nature, they need a well-balanced diet. Basset Hounds can be prone to bone and joint disorders as well as bloating and back problems if they’re allowed to overfeed. This breed tends to live to 10-12 years of age.

Mr Jeffries, a Basset Hound from West Sussex in England holds the world record for the longest dog’s ears!  On top of this amazing record, he is the grandson of the Basset Hound from the Hush Puppies shoe advertisements!  Mr Jeffries ears are 29 centimetres long.  Or put another way, that’s just about 12 inches, or 1 foot.  If this was the length of a human ear, it would hang down as far as somewhere near the heart on a female.  Imagine the ear-rings you could put on that ear!

The hound often trips over his own ears, stands on them and drags them through his food, owner Phil Jeffries, said.   His amazing ears have been insured for £30,000!

Ready for take off!!! 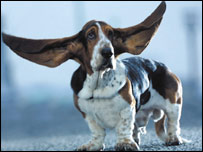